How it’s made… Meditech

The year is 1990, the time of political transition in Hungary. More and more companies are founded, however, only some of them can make it through the first couple of years.

Meditech Kft. was one of the companies founded in those times and circumstances. The fact that the company celebrated its 30th anniversary in 2020, proves that the story of Meditech is an exceptional one, indeed. With the 50/50 partnership of Mr. József Vörös and dr. Miklós Illyés, the company was officially registered in the autumn of 1990.

One would never guess what spark has inspired the first Meditech ambulatory blood pressure monitor: it was the lack of carbon dioxide. Dr. Miklós Illyés, working as a gynecologist, was studying hypertonia occurring during pregnancy and its effects on the placenta. For the study, he had used a Japanese ABPM with embryonic technology: the unit was working with CO2 cartridges. From time to time – according to the pre-programmed schedule – the valves of the cartridges opened to inflate the cuff by filling it with CO2, then at the end of the process, the gas was released into the air.  The method was working until they ran out of cartridges. Even though the solution seems to be obvious, it wasn’t as easy to import CO2 cartridges to a post-soviet country then as buying them from eBay now. With a still on-going study, dr. Illyés was desperately in need of a solution. He turned to his brother-in-law for help.

By that time, József Vörös was already the founder and owner of a company developing electronic communication panels. This product– that was originally supposed to encrypt messages between communication units at the police – was the base that Meditech units’ communication system was built on later.

First there was a hybrid

The need, the idea, and the communication panel were given – the latter one being applied on an ordinary blood pressure machine was not only able to virtually start a measurement but also to store them for further evaluation. The unit’s soul was ready to take shape in a body. There was only one thing left: finding the mentioned blood pressure machine to carry the communication board. The casting’s winner was the 703 model by Omron. Even though only a couple of hundreds of units had been manufactured from the rudimentary model, ABPM-01 still was a huge milestone in Meditech’s history. 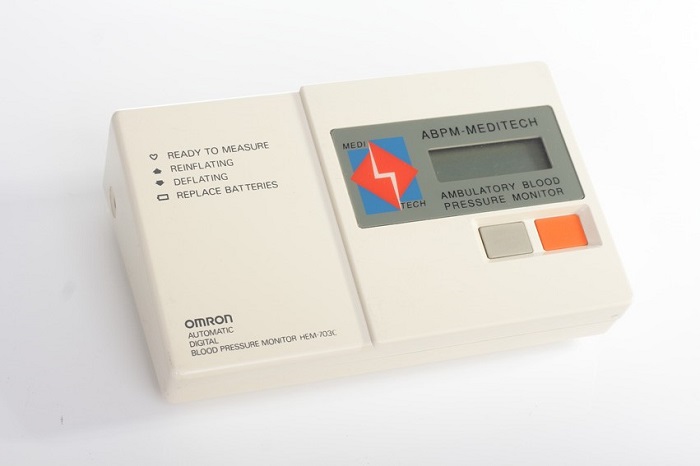 In the initial period, some of the leaders-to-be already joined the company; Dr. István Szőllősi, current Managing Director and part owner, the late Mr. László Meleg part owner and first QA Manager, and Mr. Zoltán Kollár part owner and father of the first initially developed Meditech software, among others. In the first couple of years, the company with its 5-6 employees met the criteria of a startup way before the concept became popular.  An almost windowless apartment served as the first office of the company in Budapest’s 7th district, close to Keleti railway station. More precisely, five rooms of the property, since the rest of the flat had been closed down by the landlord.  The work stations offered by the apartment were the following:

Living room
It served as a general office, a meeting room, and – partially – the center of software development.

Kitchen
It served as the basis of hardware development, at the same time it hosted the different processes of manufacturing, servicing, and packaging.

Storage room
It was the home of the artificial arm for testing ABPM units. At least 5 ABPMs were applied to the arm at a time. (The neat and surprisingly loud equipment did its duty for 20 years, in which period it tested thousands of ABPM units).

Hall
It served as a storage room. The given function made it almost impossible for the hall to fulfill its original purpose.

The ABPM-01 unit has perfectly met the criteria based on which it was designed since it functioned as an ambulatory blood pressure monitor. Yet,  it became clear to everyone shortly after its release that Omron device housing had to go. The aim was followed by a solution: the ABPM-02, that was introduced to the public in 1992, had its own Meditech-designed device housing. The design may appear quite robust today, although it would be hard to deny how important this “brick” was back then. 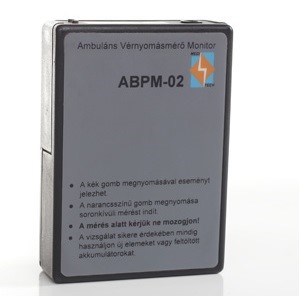 ABPM-02 got a Meditech-designed device housing

In the first half of the ’90s, the company was spreading its wings which involved a lot of tasks. Creating an own algorithm and a 100% initially developed software had become imperative. At the same time, in addition to the R&D tasks, the ABPM-02, being placed in a new device housing, created an opportunity to make Meditech a world-wide known brand. The company had a huge role in implementing and organizing hypertonia-related scientific events in Budapest. The most prestigious actors of the field of hypertonia were among the visitors, such as professor Eoin O’Brien, professor Gianfranco Parati or the late professor Thomas George Pickering, besides well-known Hungarian professors, such as the late Csaba Farsang. The participants have met not only one another but also the brand-new Meditech ABPM units.

The ABPM-02 has successfully penetrated some valuable markets, Finland among them, and this cooperation is really worth telling a few words about.  Once upon a time, a Finnish couple had gotten so enthusiastic about the theory of the Finnish-Hungarian language relation. that they visited Hungary. In Budapest,  they met dr. Miklós Illyés, Meditech co-founder by accident.. Long story short, the business was made. The Finnish “relatives” returned home with two ABPM-02 units and left behind their 20-year-old blue Mercedes in return. The ABPM devices have turned out to be the foundation of a fruitful cooperation, meanwhile, the Mercedes took the place of the old Wartburg as the company car.

At that time, the first initially developed software came out as well. The Medibase program, written in DOS environment, was publicly introduced in 1995.

The pieces of the puzzle

Despite numerous remarkable moments, the biggest breakthrough in the history of Meditech ABPM devices was definitely the launch of ABPM-03, developed by Mr. József Vörös, Mr. Péter Kende and Mr. László Meleg.  Don’t let ourselves be fooled by the device housing that is identical to the earlier model’s. The essential part was beyond the box, but became visible when it came to accuracy: the 100% Meditech-developed blood pressure measuring algorithm arrived with ABPM-03. Working with stepwise deflation and being armed with Meditech-developed software solutions, the accurate, reliable device was ready to challenge the international competition. 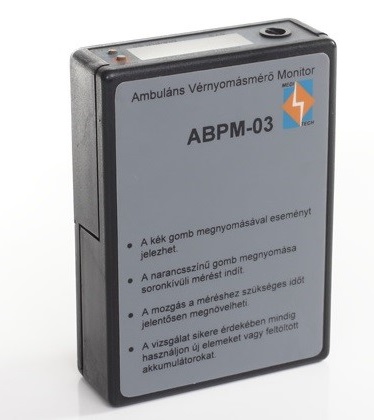 100% Meditech-developed algorithm in the box

However, the 5-room flat probably would not have been able to support the big ambitions any longer, even if the landlord had allowed Meditech to rent the rest of the apartment. After some odd and interesting turns – the company has spent some time in both of the co-founders’ homes -, Meditech finally found its long-term headquarters in Üllői street, located in the 19th district of Budapest. Thanks to the move, even new colleagues could join the company.

Sustained work has led to the new generation of BP monitors: ABPM-04 was launched in 1997. The outstanding, compact unit represents another significant milestone in the company’s life: the beginning of the OEM/private label era (the expressions cover a procedure in which the manufacturer labels the units according to the buyer’s brand, so that the product reaches the market under the buyer’s name). As it happened in the worldwide-known American manufacturer, Suntech Medicals case, whose big hit ambulatory blood pressure monitor, the Oscar 1 model’s units have been manufactured in Üllői street, in Budapest.

The bigger piece of the pie Meditech has earned, the more pressure the company has faced. The increasing international presence has led the owners (whose numbers have been expanded with a small group of the employees by that time) to a conflict of interest, as a result of which the co-founders split up. Mr. József Vörös has been the majority owner of the company since then, meanwhile dr. Miklós Illyés has found a new company to benefit from his experience gained at Meditech.

As the years have passed, the need of expanding the portfolio emerged. At first, the new way clearly could not have been developing a full disclosure Holter ECG on account of storage capacity and difficulties transferring a huge volume of data. The compromise led to the creation of a combined device: in 1999 Meditech brought the predecessor of the popular CardioTens unit, the CardioTens0 to the market (in the ABPM-03’s device housing). Besides the blood pressure measurement function, the 2-channel ECG event recorder was able to start extra blood pressure measurements when it has detected an abnormality in the real-time ECG signal. The storage capacity of the unit might put a smile on our face today, but the combined device was able to offer correlated ECG-signals and blood pressure measurements for further evaluation because of that 2 MB. (Here you can read more about the advantages of the CardioTens, and its successor, the 3-channel full disclosure Holter ECG called card(X)plore.) 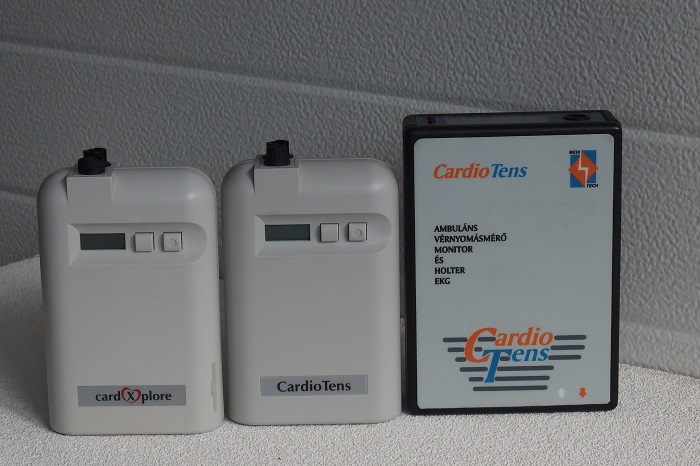 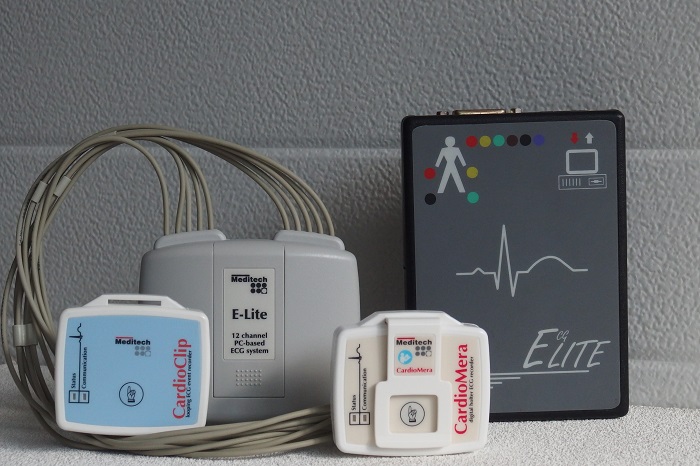 The beginnings of the ECG line

The CardioClip event recorder was chosen in 2003 to conquer the field of small, compact Holter ECGs. The same device housing was used in 2005 to deliver the first full disclosure Meditech Holter ECG that functioned only as an ECG recorder; it was the still popular CardioMera. The new generation of ECG Holters is represented by the CardiUP! Holter ECG family; both CardiUP!3 and CardiUP!12 were brought to the market in 2017. 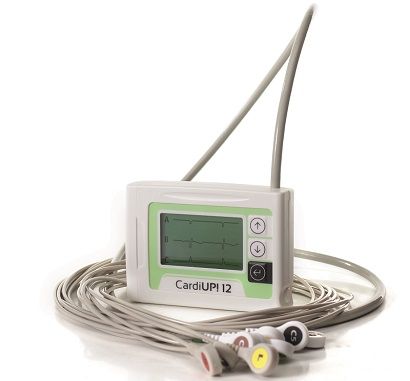 The success of Meditech ABPM’s hasn’t come to an end with ABPM-04. Moreover, if ABPM-04 had put us on the market, ABPM-05 has proven itself to be a real conquistador.  The continuous appreciation and interest that the market has shown to ABPM-05 has allowed us to lay another foundation stone – literally speaking this time. The increasing financial safety made it possible for  Meditech to build its own office in 2010. The company still has its headquarters in Mikszáth Kálmán street, now with its 6th generation ABPM available on the market. 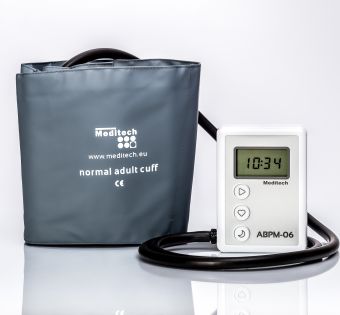 The 6th generation of Meditech ABPMs. The journey continues.

As much as we loved looking back at this exceptional journey, we always look forward to the challenges we are going to face in the years to come. Some changes are unexpectable, others can be foreseen without any magic trick: increasing development resources, an overhaul of the quality assurance system, supporting the generational renewal of the management, increasing our market share and – in some territories – taking back our hard-earned position as market leader are all goals that we are committed to achieving. Maybe a new building next to our office is also in the stars. In any case, we are going to continue our journey keeping in mind our principle of achieving more with stable, sustainable growth. 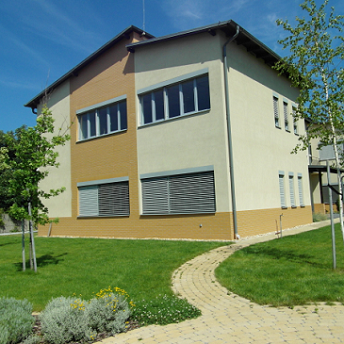