The challenges keep us on track

Old hand at the game, the managing director of Lambex Kft., Béla Bárány started to work with Meditech devices almost three decades ago, in 1993.

He first met ABPM-02 as a co-worker of a Hungarian trading house. “The unit made quite an impression on us all, but I insisted on seeing where it had been made, how the circumstances of the manufacturing looked like etc. Under the address that was given to me, I found a garage of an apartment building where a skillful technician was working alone. This picture wasn’t really convincing, however, the concept of the device, the parts that were used to build the unit, and also the software spoke volumes about professionalism. I instantly knew that we would be able to step up with this device and take our place in the international game,” says Béla Bárány about the beginning. And so they stepped up. The business man and his daughters, who speak foreign languages very well, founded their own company called Lambex Kft., which has become one of the most reliable partner companies of Meditech very quickly.

After the political transition in Hungary, the fledgling external sector has opened a lot of opportunities for Hungarian products. Hungarian ABPMs, which represented good quality, generated serious interest not only in Europe, but also in Asia and in South America. The international fairs provided the occasion for Lambex to introduce the Meditech 24-hour blood pressure monitors to the health community. “We were regulars at the Medica Fair as well as at the events of the ESC (European Society of Cardiology). We have also traveled a lot to Russia and to the former Soviet countries whose language we all spoke” remembers Bárány. One of the biggest challenges we faced back then was the lack of knowledge of the potential customers: sometimes even the participants of the healthcare fairs had a need for an explanation on what ABPMs were exactly. 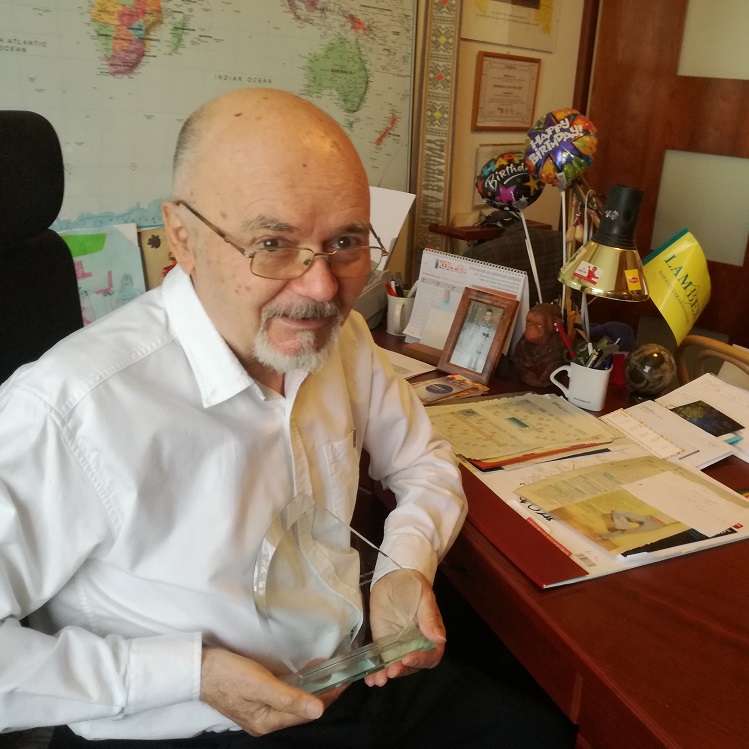 Béla Bárány with the award that Lambex has received from Meditech.

The continuous expansion of the Meditech product range gave more and more opportunities for Lambex also: the ABPM-02 was followed by the ABPM-03 unit, then the CardioTens was launched in 1999 (an ambulatory BP + an ECG Holter event monitor combined). It happened in Rio at a fair that a Brazilian doctor almost jumped out of his skin, he was so happy realizing that he could finally use a combined device. Due to a lack of a better solution he happened to make his studies with a regular ABPM and an ECG Holter tied together. The new devices had boosted interest in the Meditech brand. So much interest actually, that the family business couldn’t always bear the increasing need. Luckily, not only the need, but the sales team of Meditech was also increasing as time passed, which made it possible for our new members to help Lambex out with capacity.

Another important milestone presented itself in 2004: card(X)plore was launched. “We had a stable customer base back then who were waiting for the combined unit working as both an ABPM and as a full disclosure Holter ECG monitor at the same time. The opinion leaders (either medical experts or operations technicians) cherished the card(X)plore when it came out, and their enthusiasm hasn’t dwindled since.”

The cooperation between Lambex and Meditech - and the increasing number of units being sold - were strongly supported by the launch of ABPM-05 in 2007. In that year, Lambex was our most successful distributor.

As he replies to the question of the secret of prospering, Bárány doesn’t hesitate: “Over the past years, we have got in touch with a lot of customers who confirmed the accuracy and reliability of the Meditech devices. These are the most important features of the brand that we can always rely on.”

A generation has passed since the two companies started to work together, but the enthusiasm of the distributor company still hasn’t dwindled. What is the fuel that drives Lambex forward, which is by now responsible only for Russia? “The Russian market is full of challenges. The domestic market is really competitive, there are a lot of manufacturers from Russia as well as from foreign countries, and the political decisions can have a huge effect on the market,” Bárány. Instead of letting this difficult situation discourage them, the Lambex team always focuses on the next step. Right now that next step happens to be the introduction of the new unit to the market:

“We are preparing the documents for the registration of the ABPM-06 with my daughter Ildikó. Private hospitals have more and more room to make a decision about their own resources, and we believe that this change is going to affect us positively, especially taking our extensive network of clients into account. Our goal cannot be anything else, but to strengthen our position in the Russian market.”

The Meditech team will make every effort to ensure this great aim is reached.